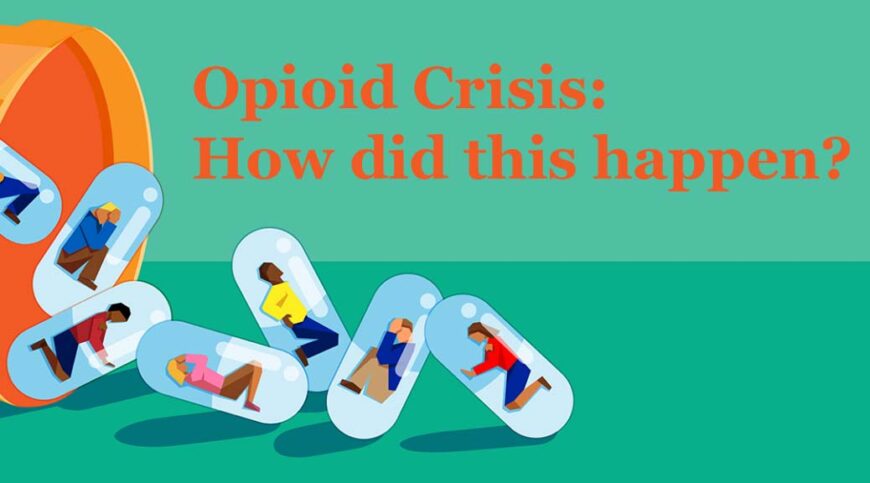 According to the National Institute on Drug Abuse, nearly 50,000 people in the United States died from opioid-involved overdoses in 2019 alone. The misuse of and addiction to opioids—including prescription pain relievers, heroin, and synthetic opioids such as fentanyl—is a serious national crisis that affects public health as well as social and economic welfare. The Centers for Disease Control and Prevention estimates that the total “economic burden” of prescription opioid misuse alone in the United States is $78.5 billion a year, including the costs of healthcare, lost productivity, addiction treatment, and criminal justice involvement.

How did this happen?

In the late 1990s, pharmaceutical companies reassured the medical community that patients would not become addicted to prescription opioid pain relievers, and healthcare providers began to prescribe them at greater rates. This subsequently led to widespread diversion and misuse of these medications before it became clear that these medications could indeed be highly addictive. Opioid overdose rates began to increase. In 2017, more than 47,000 Americans died as a result of an opioid overdose, including prescription opioids, heroin, and illicitly manufactured fentanyl, a powerful synthetic opioid. That same year, an estimated 1.7 million people in the United States suffered from substance use disorders related to prescription opioid pain relievers, and 652,000 suffered from a heroin use disorder (not mutually exclusive).

According to reports, CDC is committed to fighting the opioid overdose epidemic and supporting states and communities as they continue work to identify outbreaks, collect data, respond to overdoses, and provide care to those in their communities. Overdose Data to Action (OD2A) is a 3-year cooperative agreement through which CDC funds health departments in 47 states, Washington DC, two territories, and 16 cities and counties for surveillance and prevention efforts. These efforts include timelier tracking of nonfatal and fatal drug overdoses, improving toxicology to better track polysubstance-involved deaths, enhancing linkage to care for people with opioid use disorder and risk for opioid overdose, improving prescription drug monitoring programs, implementing health systems interventions, partnering with public safety, and implementing other innovative surveillance and prevention activities.

Public health experts across the world are also providing online resources like How To Spot Fake Ip 110 Pill Vs Real to help stamp out fake Opioid  which is exacerbating the Opioid crisis.

Doctors on the front lines say that relaxing some laws, changing the kinds of treatments for which payers reimburse and lifting the stigma around opioid addiction would go a long way in reducing deaths as well as future cases of persons with opioid use disorder.

These solutions are well worth fighting for. Much of what the public sees are the grim statistics, often failing to appreciate the value of effective substance use disorder treatment, says Margaret Lowenstein, a National Clinician Scholar at the Perelman School of Medicine and associate fellow at Penn’s Leonard Davis Institute.

“When you can help someone with effective treatment it can be pretty immediately life-changing for the patient,” she says. “It’s not perfect. People have their ups and downs, as they do with any chronic condition. But treatment allows people to do things like go back to work and see their kids and other things that are fundamental. I think if more people were able to see what effective treatment looks like, that would go a long way.”